Will you perform a Séance at 13 Paper Street?  The eminent paranormal investigator Clarissa Stubbs disappeared last year while exploring an abandoned house known for paranormal activity.  When retracing her footsteps and attempting to discover what happened, you and your team awaken the same foul phantoms as she did that fateful night.  Can you make your escape or will you join Clarissa on the long list of forgotten souls who were foolish enough to venture into the crooked old house on Paper Street? 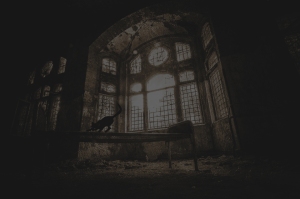 Full disclosure – We were given 4 complimentary tickets to play this game, though we’ve tried not to let this influence our opinion of the experience. We witnessed 3 other teams either departing or arriving while we were there and they were treated with the same friendly welcome that we received!

Riddlr were very friendly when we arrived and we spent a few minutes discussing different rooms that we had played while we waited. The lobby was very spacious and they monitor their games from here, which meant that when we arrived and there were two teams nearing the end of their experiences, the first team to escape were allowed to peer over the desk at their friend’s progress for the last few minutes of the game, which I thought was a great experience for them and not something that I have ever witnessed before!

The theming of this room was incredible, I was a little freaked out before the timer had even begun just due to the décor of the room! We’ve never played a horror room before, being the member of the group who scares the most easily, I tend to avoid rooms with this kind of theming, so we don’t have a similar themed experience for comparison. That being said, this was one of the best implements of a theme that I have ever come across! The music, the lighting and the decoration were just superb.

This game was a truly immersive experience, made possible by the way that any help players might require is received through a haunted mirror holding pre-recorded clues, so we didn’t hear from our hosts at all. The puzzles were linear, which isn’t usually our favourite set-up, however it was necessary for the story of the game and it really added to the atmosphere to have the whole team huddled around one element of the room, especially during the section of the game when we were navigating using a single torch!

There was a nice variety of puzzles, a few padlocks but also some automated elements which were great for providing jumps!  There was only one puzzle that we got a bit stuck on, we knew the solution we just weren’t sure how to implement it, everything else seemed to flow together pretty intuitively. While the room wasn’t easy by any means, we didn’t find it too difficult to navigate – the average completion time is 55 minutes and we were out in 25. Though it didn’t feel easy while we were playing and we in no way felt short changed by escaping so quickly (I for one was glad to be back in the real world!) I think it just happened to be a room that really played to our strengths as a team.

Simon – It was really obvious, even from standing outside the room, how much effort had been put into theming this game, and it paid off. I’m not particularly a fan of horror games, but this one was enjoyable, with a good mix of puzzles. Although it is most definitely in the horror genre, I wouldn’t say it was absolutely terrifying, so I’d recommend it for a group like ours who would normally avoid this kind of game.

Ni – I really enjoyed this room, they did a great job of building the theme and we all got sucked in. It had a good mix of puzzles that always kept the whole group occupied. I’d definitely recommend going even if you don’t like being scared.

This room was terrifying but also amazing. We were all really impressed with it! From the décor of the room to the immersive experience, everything about this room was brilliantly done. It has been one of my favourite escapes that I’ve played – even though I was mostly terrified throughout!

View all posts by cluelessescape